The first ceremony in the representative auditorium named after Prof. Tadeusz Paryjczak, which took place immediately after the opening ceremony, was the conferment of an honorary doctorate from Lodz University of Technology. 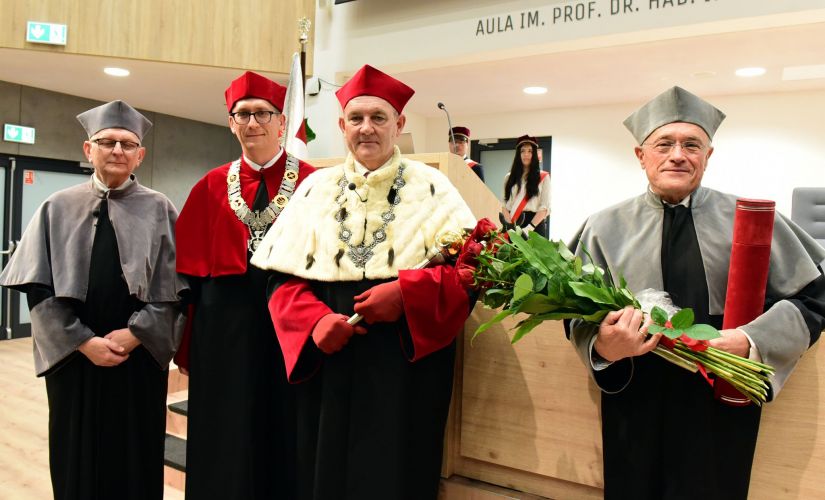 This highest academic dignity was awarded to Prof. Klaus Müllen, a scientist with outstanding achievements in the fields of polymer chemistry, supramolecular chemistry and nanotechnology as well as in the potential applications of graphene materials in organic electronics.

Professor Klaus Müllen is one of the world's most prominent and influential chemists. His achievements set new directions in organic and polymer chemistry and in advanced materials engineering – With these words Professor Jacek Ulański, the doctoral thesis supervisor and head of the Department of Molecular Physics at the Faculty of Chemistry, began his laudation.

Prof. Klaus Müllen became a professor at the University of Cologne already in 1979, 10 years after his graduation, and then at the University of Mainz (1984). From 1989 until his retirement in 2017, he was director of the Max Planck Institute for Polymer Research in Mainz. The professor has about 2100 articles in leading chemistry and interdisciplinary journals. His publications have been cited more than 140,000 times and his Hirsch index is as high as 171. He has given more than 400 plenary and keynote lectures. The honorary doctorate of TUL is the ninth in Prof. Müllen's curriculum vitae. He is an honorary professor of several dozen universities in the world and a laureate of many prestigious scientific awards: American, British, Chinese, French, Israeli, Indian, Canadian and other.

Klaus Müllen owes his successes to his extraordinary ability to design structures of molecules that exhibit the desired properties and then synthesise them precisely. As a result, the circle of scientists interested in collaboration with Professor Müllen goes far beyond the field of chemistry and includes physics, biology, electronics, optoelectronics as well as materials engineering in the broadest sense. Our collaboration with Professor Müllenen has been going on for more than 20 years - said Prof. Jacek Ulański. The application for awarding the German scientist with the title of doctor honoris causa was submitted by the Faculties of Chemistry and Biotechnology and Food Sciences.

Prof. Klaus Müllen has made a special contribution to the ICRI-BioM project developed by a consortium led by TUL with the participation of two Max Planck Institutes. This project received funding from the Foundation for Polish Science in the International Research Agenda PLUS competition. Prof. Müllen is chairman of the International Scientific Committee of ICRI-BioM.

In a lecture given after the ceremony, Prof. Klaus Müllen shared his thoughts on the role of science, with a special focus on the importance of chemistry. The lecture was extremely interesting, in which Prof. Müllen spoke about the importance of research, the certain danger that it entails and the responsibility that is necessary in doing so.