Professor Łukasz Albrecht was awarded the Stanisław Kostanecki - prestigious award granted for outstanding achievements in organic chemistry. The ceremony took place during the 64th Congress of the Polish Chemical Society which brought together 650 scientists. Prof. Albrecht, as special guest, gave a plenary lecture on the tools used to create chemical diversity, i.e. organocatalytic cycloadditions, which is a way of accelerating a special type of chemical reactions. 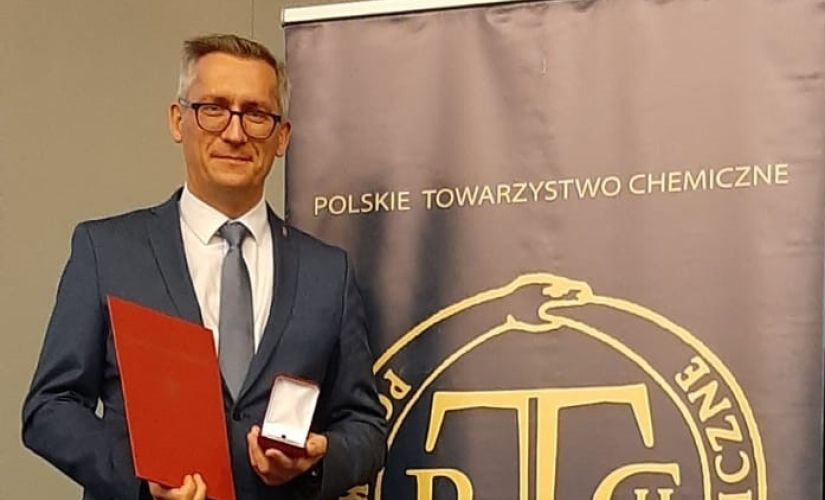 Speaking of the award he received, Professor Albrecht confessed

- My passion is modern organic chemistry, particularly asymmetric catalysis and the study of catalysts with well-defined spatial structures. Their modification and use in the synthesis of biologically important compounds can contribute to the creation of organic compounds of great practical importance, including, for example, the design of new drugs. I am particularly proud of the team of young scientists I have created and who I work with, feeling their tremendous enthusiasm for discovering new things.

This is confirmed by the fact that Aleksander Zamojski Award was given during the Convention to Sebastian Frankowski, PhD, for his distinguished doctoral thesis supervised by Prof. Albrecht. His work on organic chemistry, or stereochemistry to be precise, was jointly awarded by the Polish Chemical Society, Institute of Organic Chemistry, Polish Academy of Sciences, Warsaw and the Nobilus Ent company.

Professor Albrecht’s career has been extremely successful - he received the title of Professor just 15 years after graduation at the age of 39 - is a scientist of national and international renown, and at his alma mater is Vice-Chancellor for Science and Director of the Institute of Organic Chemistry. He is a graduate of the Faculty of Chemistry of Lodz University of Technology. For his doctoral thesis made just five years after graduation he received the Prime Minister's Award and the Award of the Sigma-Aldrich company and the Polish Chemical Society.

He has co-authored over 100 publications in JCR journals and several chapters in books. He has been the head of seven research grants funded by the National Science Centre, the Foundation for Polish Science and the National Centre for Research and Development.

He has received numerous awards for his scientific work. He is a laureate of Włodzimierz Kołos Scientific Award of the Third Division of the Polish Academy of Sciences, the Young Scientist Medal from the Warsaw University of Technology, Mieczysław Mąkosza Scientific Award from the Foundation for the Support of Young Scientists and an Award for Outstanding Achievements Contributing to the Development of Science for Young Scientists Working in the Łódź Province. He was also a finalist in the 14th edition of the Polityka Science Awards.