A celebration of joy, youth and academic sport

An interview with the Rector of TUL Prof. Krzysztof Jóźwik about the European Universities Games taking place in the second half of July in Lodz. 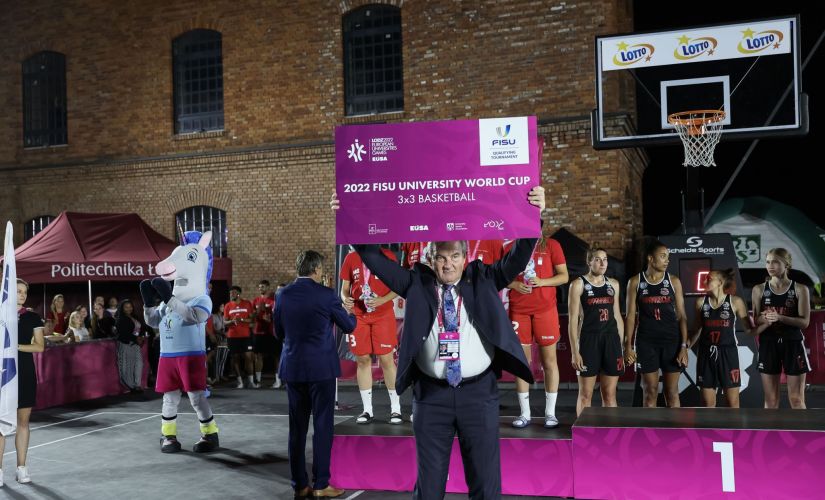 Preparations for the European Universities Games – EUG lasted several years, and Lodz University of Technology took on a key role in implementing such a large-scale event. Now that the competition is coming to an end, can the Rector say that it was a successful event in terms of organization?

I think very successful. I receive a lot of thanks and congratulations. I will say - perhaps immodestly - that organizationally the Games were superb, and the team working on them passed the test with flying colours, even though they had no previous experience in implementing such large-scale events. There are voices that this event is better organized, much better than many previous universiades. I feel satisfied with this fantastic evaluation of the participants of the EUG in Lodz.
All the more so because I took the decision to organize this event, which is huge in every way, with our own resources. We had to organise many tenders, e.g. the European tendering procedure for the catering of the athletes, i.e. 70,000 meals, arrange accreditation for the teams, accommodation, communication, security, leisure time - these tasks were very, very numerous, but everything worked like in a well-oiled machine. 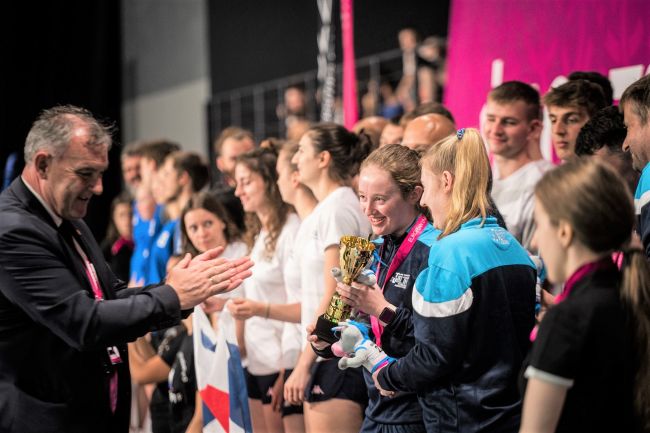 How do you assess the promotional effect for Lodz University of Technology and the city?

This is a tremendous success for our university. During the competition, several thousand people from the world "passed" through our campus. They like this place. We are recognizable – the participants chant Lodz University of Technology. The unicorn EUGenio, which is the mascot of the games, made a huge sensation. Everyone wanted to have pictures with him. I have an idea to use his fame and to make him a symbol of sport in Lodz.
The European Universities Games also contributed to the promotion of certain places in Lodz. The participants liked Piotrkowska Street very much, they liked the Geyer Gardens, which included courts for beach volleyball and less popular beach handball and 3x3 basketball. Our basketball association said it was the best prepared competition in this discipline they had ever seen.
All this makes for a very good promotional perception. The number of publications in the media, traditional and social media and the number of people who react to them is really huge. 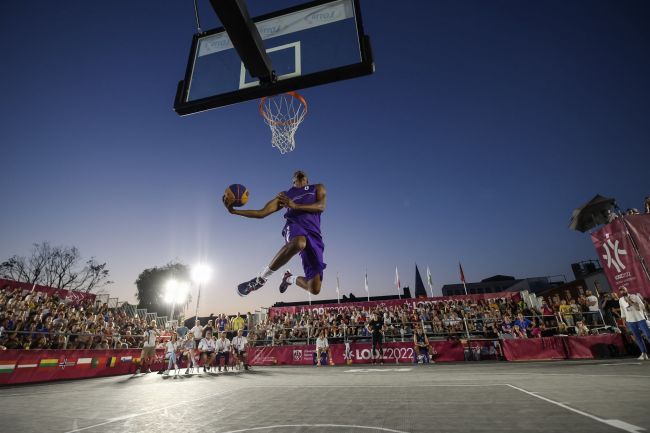 Thousands of athletes came and you watched them compete. You are a fan, and you still play volleyball. Being so close to sport, what can you say about the students, overwhelmingly amateurs, who competed during the Games?

I had the opportunity to observe several different disciplines. Once Stéphane Antiga said to volleyball players – have fun with the game – I saw that the student-athletes who came to us were having fun, they were happy that there is this event, that they are competing. On the other hand, there was also a desire to win. At times they would bite the floor, the grass or the sand to be better. It felt like they were doing their best.
I think a lot of people were satisfied with the level of 3x3 basketball, the finals of beach volleyball, football, badminton and other disciplines. By the way– water polo teams from Hungary and Croatia play in a professional league and maybe that's why their fierceness was sometimes in contrast to the joy of their opponents from the fact of participating in the game itself.
I think it was a fantastic sporting event. The emotions of the players after the final futsal match played in our Sports Bay resembled undisturbed children's joy. You can wish everyone such an experience. 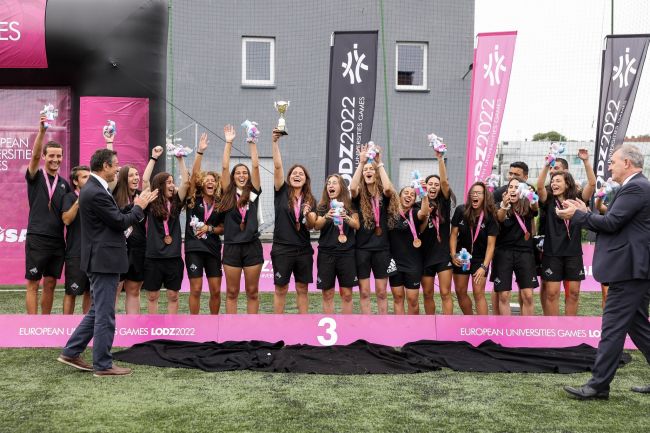 Were there any problems during the EUG that required quick decisions and quick action? What do you consider to be the biggest success of the event? You can name a few...

Problems, issues, some hold-ups...there were a few of them. With such a large event, it is impossible for everything to be perfect down to the dot. Very good communication between me and the organizing committee obviously makes it easier to solve potential problems and make decisions. Our reaction was always so quick and efficient that virtually no outsiders noticed any moments of crisis. This is also an enormous success of this event.
The first day of athlete accreditation was a day of organizational fine-tuning It happened very quickly. Let me use a comparison here. Every mechanism, and I say this as a mechanic by training, has elements that sometimes require exceptional care, some improvement, some tweaking, which makes the machine work well.
And the successes? EUG as a whole event was a fantastic success. I want to point out that this is a huge event in which the organizer has to deal with several hundred external recipients. In addition, these are university competitions that are not as popular as professional sports. There are more athletes and fans at the Olympics, but the organizer concludes contracts with one institution, which is the IOC. Besides, they attract numerous and wealthy sponsors. We had a different situation. The time of the pandemic not only made it difficult to organize, but also closed the wallets of many institutions, so that we did not have a queue of people willing to support the EUG financially.
What was special for me personally was the opening ceremony, where I uttered the most important formula: The European Universities Games are now open. I am proud that in the artistic part we were able to show Poland, Lodz, Lodz universities, Lodz University of Technology and students' achievements, including those achieved in AZS. The combination with wonderful music gave a very nice effect and will definitely be remembered. 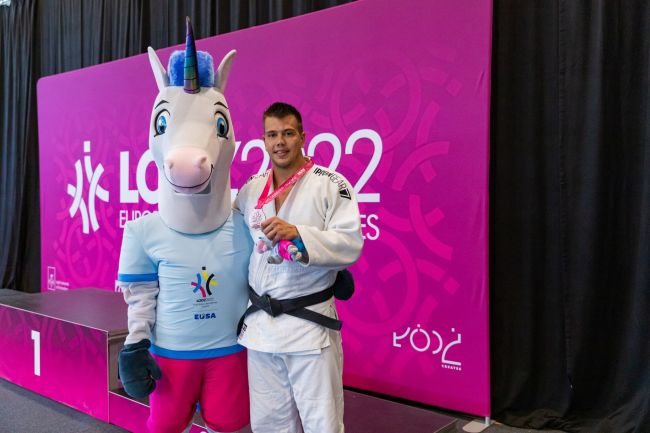 The unicorn EUGenio was also a success, the mascot chosen by the Lodz community became the favourite of the participants. The short spot announcing the event a few days before its start, with Krystyna Czubówna, who is mainly associated with nature films, as the voiceover, was excellently received. I think it was a success that dedicated bus lines were set up for the event participants, making it easier to transport and move around the city and between sports venues.
Speaking of successes, the sambodrome and the Erasmus run must be mentioned. The sambodrome, was an event to which those walking along Piotrkowska Street and those spending the evening in the gardens set up in the street reacted wonderfully as they stood up, danced and applauded.
Among the sporting events, the 3x3 basketball was a remarkable success. Played at 10pm in the evening, with artificial light, a 600-strong audience in the stands and a large standing audience watching, it gave everyone unforgettable positive emotions.

You were extremely involved in the ongoing games. Tired? Satisfied? Full of excitement? What feelings are accompanying you today, now that the Games can be concluded?
I am very impressed with everything that has happened in connection with EUG, both in the organizational and sports part. I am very satisfied. I am extremely pleased with the volunteers who came from all over the world – from Brazil to New Zealand. I am very pleased with the cooperation with EUSA and AZS. I would like to thank the City Hall for their cooperation. Without the very significant financial assistance of the Minister of Science and Education, the event could not have taken place. Mr. Marshal helped us a lot. With the cooperation of the Marshal's Office, our participants were able to travel to Warsaw free of charge thanks to the agglomeration railway. I have great gratitude and respect for all those who organized the European Universities Games, for those who supported us in this, for the volunteers for their efforts in what they did. Congratulations to the athletes and their coaches, the medallists, winners and losers. Recalling the words of a famous basketball player - I can accept failure, but I can't accept not trying. - I want to say that everyone associated with the EUG in Lodz showed that they really tried and succeeded.

Despite the fact that we are not a university where sport is a core area of learning and education, we have shown that we can shoulder such a challenging sporting event in many respects. We have also gained invaluable experience.
Am I tired? No! All the time the 'adrenaline' keeps me going as there are still two days to go.
When the Games are over, there will be a moment of breath and I will go on holiday.
Probably there will be a kind of emptiness, after such a specifically intense time, but there will remain memories registered in our minds and on many films and photographs to which we will return.