The inauguration of the academic year took place for the first time in the new auditorium of prof. Tadeusz Paryjczak in the Alchemium building. The possibility of direct participation in the ceremony made the audience full of guests. 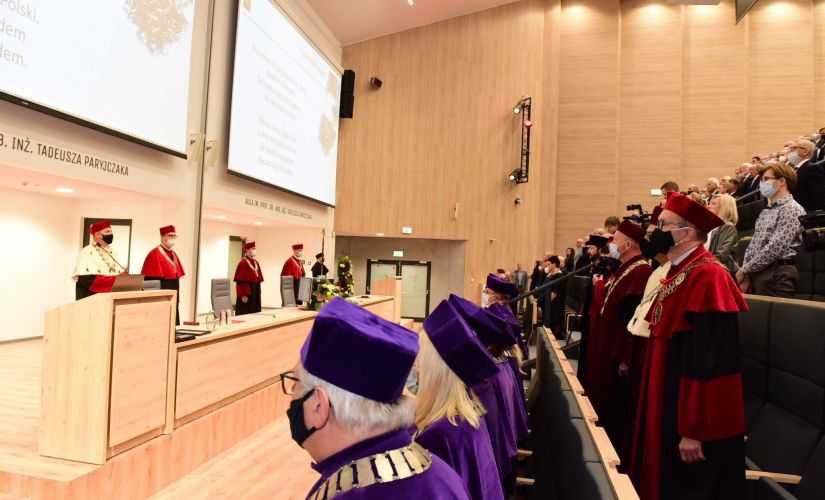 We start each academic year by paying tribute to prof. Bohdan Stefanowski - the founder and first rector of the Lodz University of Technology. A procession of university authorities, members of the Senate and students dressed in gowns goes to the monument to prof. Stefanowski to place a bouquet of flowers there.
In celebrating the beginning of the 2021/22 academic year, we were accompanied by representatives of the academic and economic community, city and regional authorities, as well as parliamentarians and guests from abroad. Many congratulatory letters were also received, including from the Prime Minister and the Minister of Education and Science. The guests' speeches mentioned the theme of returning students to normal education and appeals to young people to vaccinate against Covid-19.
- I am happy that it is possible to return to the university - said the rector, prof. Krzysztof Jóźwik, welcoming the participants of the inauguration gathered in the auditorium and watching the Internet broadcast.

Traditionally, the inauguration began with the Rector's speech. Prof. Krzysztof Jóźwik touched on topics important for the university related to management, new initiatives in science and education, cooperation with the university environment and new investments.

Since 2018, the title of Senior Professor of the Lodz University of Technology has been awarded. This unique group was joined by five scientists of merit for the university. Commemorative diplomas from the hands of the rector were given to: prof. Liliana Byczkowska-Lipińska, prof. Jerzy Gębicki, prof. Janusz Rosiak, prof. Zbigniew Gawroński and prof. Bohdan Wendler.

The inauguration of the academic year is especially important for students returning to study. On this day, awards and distinctions are awarded for special achievements. It is always a nice element of the ceremony to award the authors of the best diploma theses.
...for master's theses
In the competition Professor Mieczysław Serwiński, the award went to mgr inż. Mariusz Mąkiewicz (head of the work of Prof. Jerzy Peter). The sponsor of the award is Veolia. The Lodz Federation of SNT-NOT and the University Council of FSNT NOT at the Lodz University of Technology awarded the main prize to mgr. Eng. Piotr Wysocki (head of the work of Dr. Beata Brożek-Płuska from the Interdepartmental Institute of Radiation Technology) and was awarded by M.Sc. Aleksandra Janusz (head of the work: Dr. Jacek Grabarczyk from the Institute of Materials Engineering). The sponsor of this award is the Common form.
...for academic achievements
The Student of the Year 2019/2020 titles were awarded for achievements in science, sport and organizational activity. Honorary diplomas were received by: Maciej Kupras (Faculty of Mechanical Engineering), Marcin Klimkiewicz (Faculty of EEIA), Bartłomiej Rogalewicz (Faculty of Chemistry), Anna Szychulska (Faculty of TMiWT), Dominika Krzeszewska (Faculty of Science and Technology), Paulina Kaszubska (Faculty of BAIŚ), Agnieszka Augustyniak (Faculty of FTIMS), Magdalena Borszyńska (ZIP Department), Anna Szczepańska (IPOŚ Department), Julia Gruszczyńska (IFE).
for outstanding athletes
The Rector's Special Award for outstanding sports achievements was awarded to: mgr inż. Kajetan Duszyński - PhD student at the Interdisciplinary Doctoral School and Olympic champion from Tokyo in the 4x400 m mixed relay and eng. Aleksandra Bednarek - student of biomedical engineering and the first Polish woman to win the triple crown in open water swimming. Both of the honored appeared on the podium once more, giving the inaugural lecture. Kajetan Duszyński additionally received a gift from the Council of the Lodz University of Technology, handed over to him by its chairman Mirosław Sopek, vice-president of MakoLab for technology.

An important point in the program of each inauguration is the matriculation of newly admitted students and doctoral students. The persons who obtained the best results in the recruitment procedure took the oath during the university inauguration, as is customary.

This year, the inaugural lecture was unique, as it was delivered by three people who spoke about their scientific and sports passions. Rector prof. Jóźwik called it a special triathlon. Prof. Katarzyna Pernal - a world-renowned physicist who successfully practices road cycling, spoke about large-scale simulations of quantum matter, trying to answer the question of where we are, where we will be and where we would like to be.
MSc. Kajetan Duszyński - PhD student and Olympian and eng. Aleksandra Bednarek - a student and champion in swimming in open waters, talked about the path to successes and the support they receive, among others. on the part of the university to be able to develop their sports passions without losing sight of the scientific ones. In the case of Kajetan Duszyński, it is protein crystallography, and Ola Bednarek is interested in the use of 3D printing in tissue engineering.