Grand opening of the Alchemium

"Alchemium-magic of the chemistry of tomorrow" is a modern complex of buildings for the Faculty of Chemistry at Lodz University of Technology. The first building was officially opened with the participation of distinguished guests from the world of science and business, as well as MPs and representatives of local authorities. 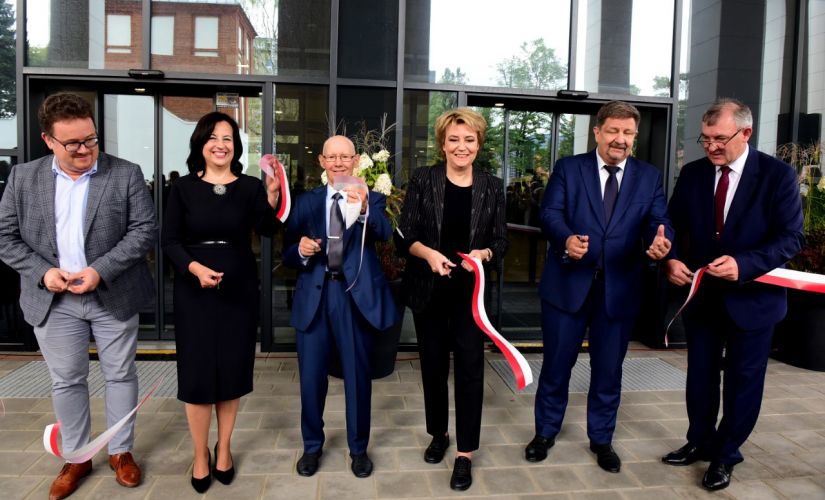 The building houses an impressive conference centre, 17 classrooms and dean's office rooms. On the ground floor there is a conference room for 100 people, which will be the place of the TUL Senate meetings. The heart of the building is the Lecture Hall, extending over three floors named in memory of Professor Tadeusz Paryjczak. It can accommodate 500 people.

It is here that, starting from today, the history of Lodz University of Technology will be written down, as the Lecture Hall will become the forum for the most important celebrations - said rector Professor Krzysztof Jóźwik.

The total area of the completed building is almost 11,000 square meters. In the vicinity of the Alchemium, a fragment of the former factory building of Szaja Rosenblatt from the 19th century was incorporated, which refers to the historical heritage of Lodz University of Technology. 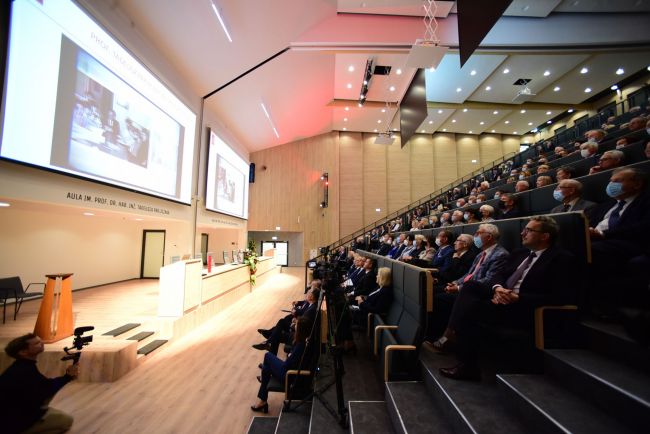 The Marshal of the Lodz Region, Mr Grzegorz Schreiber, holding a few samples of materials in his hand, said

This is the result of the work of scientists from this Faculty and their cooperation with Łódź research centres. These are materials of the future, in a sense magical, that will be used to heal wounds and regenerate bone and cartilage tissue defects. We need people to implement such ideas - we already have great scientists and premises. We are standing in front of such a place. The voivodeship authorities will support this type of activity, because it is our common accomplishment. Something that we want to leave in Łódź and the voivodeship for many years to come.

The Mayor of Łódź, Hanna Zdanowska, emphasized that the conditions for carrying out research are the basis for the development of science.

Such investment projects will encourage the young generation to stay in Łódź to build our city and region together.

The building was consecrated by the Metropolitan Archbishop of Łódź, Grzegorz Ryś, who in the postscript to the prayer said - Please, Lord, let there be chemistry between us.

The Rector received many congratulatory letters, including those from the Prime Minister and the Minister of Education and Science.

I am glad that a strong research centre, such as the Faculty of Chemistry, will be able to develop dynamically under favourable conditions. The Alchemium will become a forge of next generations of outstanding chemists, following the example of the inspiring Professor Alicja Dorabialska, a student of Maria Skłodowska-Curie - one of the founders of the Faculty of Chemistry at Lodz University of Technology. 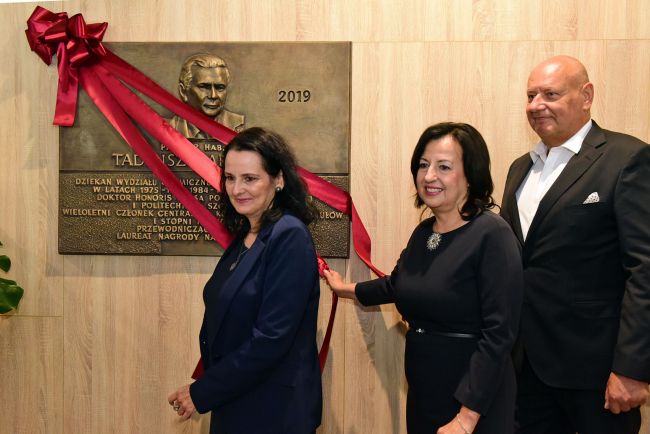 In memory of Professor Tadeusz Paryjczak

The Professor created a unique research team at Lodz University of Technology, which, in recognition of the high level of research, after several years gained the honourable title of the "Lodz school of adsorption and catalysis". He was an outstanding scientific authority, and a significant feature of the Professor was also active organizational activity. He was a member of, among others, the Central Committee for Degrees and Titles, the Committee of Chemical Sciences of the Polish Academy of Sciences and the Science Council in the Ministry of Science and Higher Education. For several years he chaired the Group of Chemistry, Chemical Technology, Chemical Engineering and Environmental Protection of the Scientific Research Committee. He was the dean of the Faculty of Chemistry at Lodz University of Technology six times. He was not only an outstanding scientist, but also a good and wise man. He will always remain in our hearts and grateful memories.

Professor Paryjczak was also reminisced by his colleagues and students in the film, in which archival photos were used as the background.

Many of us, employees of the Faculty of Chemistry, when assessing our scientific life and work at Lodz University of Technology, should start with the sentence "I was lucky to meet professor Paryjczak on my way," said professor Henryk Bem, former dean of the Faculty.

The Professor's success is that he created a very strong Institute, raised many well-known and respected scientists and introduced the principles of green chemistry - emphasized Professor Henryk Górecki from Wrocław University of Technology.

Professor Ireneusz Kocemba from the Institute of General and Ecological Chemistry of Lodz University of Technology said - A master-student bond was created between us, the students and the Professor, who inspired us to try to match the master.

The film could not miss Professor Małgorzata Iwona Szynkowska-Jóźwik, who spoke about her father

Work was his passion and science was a great adventure, but he also liked contact with nature, and his other passion was sport and travel. He was a loving husband, father, grandfather. Together with mother - Maria Hordyńska, they created a warm and very hospitable home, where love and respect prevailed.

Professor Małgorzata Iwona Szynkowska-Jóźwik shared her impressions from the first months of work in the new building, thanking everyone who provided support and help. As an expression of gratitude, there was a graphic depicting

the completed Alchemium building, the author of which is Professor Jolanta Rudzka-Habisiak, former rector of the Academy of Fine Arts in Łódź.

The future of investments

The cost of the first stage of the investment project was slightly over PLN 64.8 million. For this purpose, Lodz University of Technology received PLN 47.5 million in subsidies from the Ministry of Education and Science. The guests saw how the building was constructed in a film journey. The drone shots of the Alchemium were impressive, showing details of the architecture and the surroundings of the building.

The tender for the implementation of the second stage of the investment project is in progress - the construction of an educational and research building with modern laboratories. It is scheduled for 2024. The total area of the Alchemium complex is over 27,000 square metres.