For the first time, the rectors of the Lodz University of Technology and the Medical University of Lodz awarded a joint award. It was awarded ex aequo to two teams of researchers from both universities for the best joint-university scientific publications in 2021. Both deal with topics that are very important to our health and life. 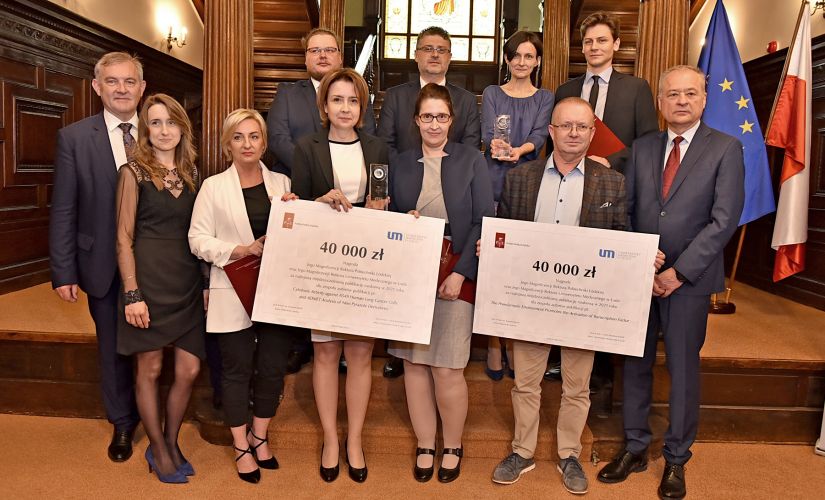 One of them is devoted to a disease that occurs in pregnant women, called preeclampsia, and more commonly, pregnancy poisoning. It is a serious threat to the life of the mother and her child. The second team presented research related to the search for new drugs in the fight against lung cancer. Both solutions and their authors are described in separate articles.

Rector of Lodz University of Technology Prof. Krzysztof Jóźwik and the rector of the Medical University Prof. Radzisław Kordek met with the researchers to congratulate them and present them with symbolic checks.

- This is a beautiful celebration for great people. Many scientific achievements are interdisciplinary. And the cooperation of scientists from TUL and MUL leads to results that we can enjoy in our lives, not only as patients - says the Rector of Lodz University of Technology, Prof. Krzysztof Jóźwik - Today it is difficult to draw a clear line where chemistry, biotechnology, IT, materials engineering end, and medicine or pharmacy begins.

The aim of the competition was to encourage joint research and promotion of outstanding scientific achievements.

- Today's awards are another tangible proof of the effective cooperation of scientists from both universities. This inter-university cooperation is the key to the success of the so called “Łódź Akademicka”. By acting together and creating diverse research teams, we can achieve more - adds the Rector of MUL, Prof. Radzisław Kordek.

Both rectors emphasized that the new initiative of Lodz University of Technology and Medical University underlines the university's many years of cooperation.

10 applications were submitted to the competition. The works were assessed by a committee composed of Vice-Rectors of both universities: dr hab. n. med. Lucyna Woźniak, prof. Paweł Strumiłło and prof. Łukasz Albrecht.

The competition brought an unexpected result. After counting the points, it turned out that the same number was received by two publications: The Preeclamptic Environment Promotes the Activation of Transcription Factor and Cytotoxic Activity against A549 Human Lung Cancer Cells and ADMET Analysis of New Pyrazole Derivatives.

Both have been published in the prestigious International Journal of Molecular Sciences. The publications combine medical sciences and computer science as well as chemical sciences and pharmaceutical sciences. Each team will receive PLN 40,000.