Chemical science is a very broad field that can be applied in areas such as product authentication and medical diagnostics. One of the tools used by scientists is nuclear magnetic resonance (NMR) spectroscopy. This is the area in which dr inż. Barbara Pacholczyk-Sienicka, a member of Prof. Lukasz Albrecht's research team, works. 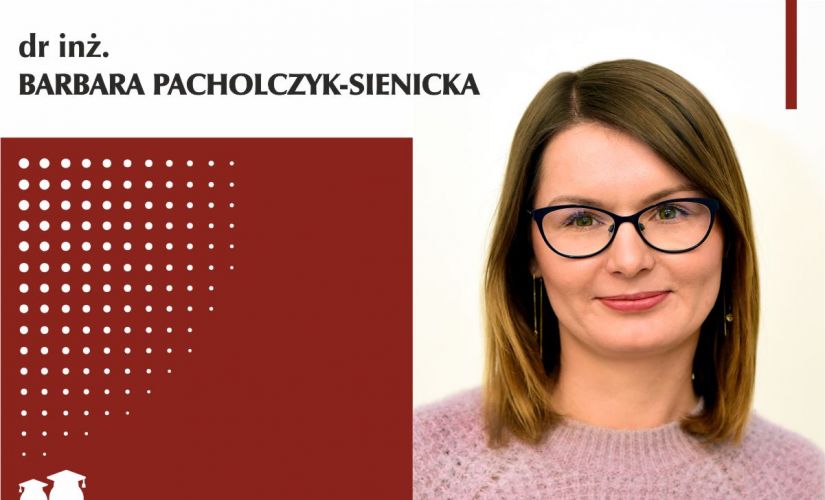 What possibilities does NMR spectroscopy offer?

It is the most valuable and useful analytical method used to study the structure of organic compounds, reaction mechanisms and kinetics, dynamic processes, and also to determine the composition of chemical mixtures. One can say that NMR spectroscopy is a kind of interview that a researcher conducts with the studied molecule. We ask questions while irradiating the sample with a radiofrequency electromagnetic field, and the spectrum obtained as a result of the experiment provides answers to where our molecule is, what it is doing, and what kind of company it is in.

How can this method help us?

The enormous possibilities of NMR spectroscopy allow for wide application not only in chemistry, but also in biology and medicine. Thanks to the use of low-energy electromagnetic radiation, even the most delicate samples are not damaged, so this method is widely used by doctors to diagnose many conditions. It proves particularly useful in imaging the brain, poorly differentiated in X-ray studies.

What other possibilities does it offer?

In recent years, we have noticed increased scientific interest in the use of NMR spectroscopy in product authentication. Continuous development of this technique is fundamental in the fight against product counterfeiting, which is a serious economic and social problem. Unfortunately, as the path from producer to consumer lengthens, the risk of introducing non-genuine products on the market increases. Manufacturers, mostly out of the desire to increase profits, use illegal practices during production, and the consequences of such actions are felt mainly by consumers, since they buy non-authentic products of worse quality, which, in some cases, may be dangerous to health. As consumers, we are increasingly developing the habit of reading the label before we decide to buy it. Since we pay for quality, we want to be sure that the product actually contains what the manufacturer declared.

What is checked in the TUL laboratories? 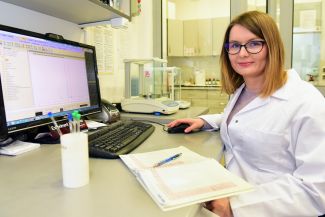 We conduct tests of authenticity of perfume products, honey varieties, as well as Polish Vodka - a protected geographical indication. Since 2013, in accordance with the amendment to the Act on production of spirit drinks, in order to put the inscription Polish Vodka on the label, its producer must obtain it from traditional grains such as wheat, triticale, rye, oats, barley or potatoes originating exclusively in our country. Based on the NMR spectra obtained, we are able to determine the geographical and botanical origin of the product, and thus confirm or question its authenticity. Recently, we have also conducted research on developing a rapid method for authenticating perfume products using NMR spectroscopy. Based on this research, we were able to develop a protocol that allows us to distinguish genuine from inspired and counterfeit perfume samples.

You are involved in metabolic profiling of biological samples using NMR spectroscopy. How does this type of profiling work? Where is it used?

Spectroscopic methods, such as NMR, have so far been mainly used by chemists to determine the structure of chemical compounds and bio-molecules, while they are finding more and more applications in metabolomic research. The increase in the incidence of civilization diseases associated with aging, which has been observed for many years, leads scientists to search for new, more effective and selectively acting drugs. The effectiveness of applied therapy depends primarily on early detection of the disease, before its visible symptoms appear. Patients' reactions to therapy vary and are sometimes difficult to predict, which is why modern medicine strives to personalize treatment. One method of personalizing treatment is to determine the patient's metabolic profile based on NMR. The key task of an organism, related to its reactions to external stimuli, is to maintain an internal balance, the so-called dynamic homeostasis. Any disturbance of the body from this state of equilibrium may be associated with the initiation of a pathogenic process manifesting itself, among others, as qualitative and quantitative changes in the set of metabolites of cells, tissues and body fluids. The search for these changes in the metabolic profile and the determination of markers appearing at the time of disease initiation is dealt with by the field of science called metabolomics, which is greatly supported by analytical methods. Collecting as much information as possible on the patient's metabolic profile allows us to determine the current state of his or her body. Thanks to NMR spectroscopy it is possible to determine metabolites characteristic of pathogenic processes, and with the support of this technique with statistical tools to link changes in chemical composition with the stage of the disease and possible prognosis. 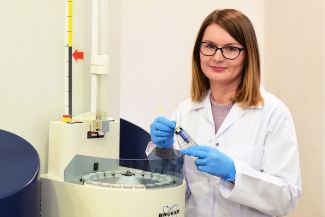 I have analyzed metabolic profiles of healthy and pathologically altered tissues, mainly breast and colorectal cancer tissues, as well as those affected by degenerative disc disease. The NMR spectrum obtained for each of these tissues allowed me to determine their chemical composition and determine biomarkers characteristic for cancer or degenerative disease. I then correlated the results obtained with clinical data to see which of the compounds discovered could be linked to the severity of the disease and would allow me to predict the course of the disease. The future of NMR spectroscopy in metabolomic research is related to the technical development of MRI scanners, which would allow us to monitor chemical changes in diseased tissues during the course of the disease and the therapy used. Therefore, it is very important to collect information on metabolic profiles accompanying lesions by NMR. This allows for additional information to be obtained to help determine individual treatments for each patient.

What inspires you in your scientific work?

I think that people who surround us and encourage us to work are an inspiration in scientific work. Above all, it's the joy they feel when they hear that, through the use of various NMR techniques, we are able to bring them closer to solving their current scientific problem. It is a great satisfaction and motivation to continue. Some time ago I read a biography of the Nobel Prize winner Richard Feynman, who had very apt words for young people starting their careers: "Keep your eyes wide open, be critical of everything, accept no truth without deep reflection, expose and exterminate half-truths and demagoguery, learn to admire the beauty of the world around you, and think over everything - and about everything!".

Since I was a child, I have always assumed that it is better to know than not to know. It is definitely easier to live knowing how things work and understanding the processes and phenomena that surround us. In everyday life we use a lot of devices and gadgets, without thinking about how they work. And it seems to me that it is useful to know what happens in a microwave oven, a refrigerator, a digital camera or how a thermos works. As a mom of a five year old, I can say that being a scientist makes it easier to answer difficult and inquisitive questions of a child.