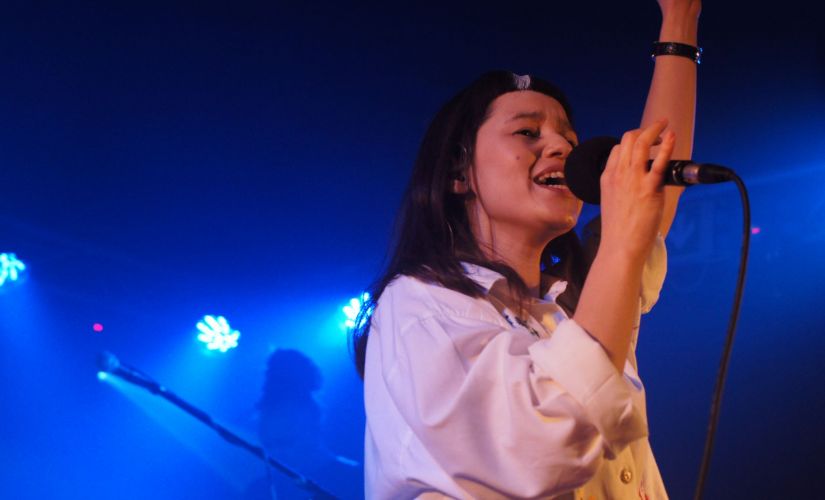 Eliza A. Tkacz is an assistant professor at the Institute of Turbomachinery at TUL. Her doctoral dissertation (2015) focused on numerical modelling for design and diagnostic purposes of small power machines. From 2013 to 2015, she was three times on foreign scholarships in France at Institut National des Sciences Appliquées Lyon, where she conducted research on foil bearings. Her great passions are music and singing.

Have you had musical talent since childhood?

I was not born into a family with musical traditions. My potential was noticed in kindergarten and I took exams to the music school. I remember that from early childhood, music made my imagination run wild and transported me to another world, not only of sounds but also of images.

At the age of seven I began my education at a elementary music school, in the piano class. It was then that I composed my first song, which won a prize in a children's competition. Later I graduated from the Secondary Music School of the first and second degree in Lodz. In terms of diplomas I am a professional musician.

You graduated from a music school in piano class and then went on to study at the Faculty of Mechanical Engineering at Lodz University of Technology. This is quite a surprising choice, what happened?

Being a musician is a difficult profession. I didn't have any role models in my family, thanks to whom I could follow my musical career path. I had to make it on my own.

In my final exams at the music school I took maths and physics at an extended level. I thought about several different fields of study, including economics and computer science. In the end, however, I chose Gestion et technologie at IFE at Lodz University of Technology. In the meantime, I realised that my mind is more scientific than I thought and I changed my field of study to Mechanical Engineering and Applied Computer Science at the Faculty of Mechanical Engineering.

For many people music goes hand in hand with scientific thinking. This was also the case for me. Now, after many years I conclude that I made the right decision after graduation. I can deal with music out of pure passion, nothing limits me.

You hold a doctorate degree in engineering and specialise in machine mechanics, and in your spare time you record amazing sounding tracks. Where does this urge come from?

When you do something from the age of seven, it becomes part of us. Some people go to the gym after work, go to the cinema or turn on the TV, I sit down at the instrument because it has become my daily routine. Sometimes I actually manage to create something that sounds original. Then I try to catch it, refine it and show it to my audience. I make sure that my compositions are original both in terms of music and lyrics.

Nature has blessed you with many talents. You compose your own songs, write the lyrics, play the keyboard and sing beautifully in several languages. Where do you draw your inspiration from?

I draw inspiration from everything, but least of all from music. I don't want my compositions to be repetitive. I'm most inspired by timeless literary themes and people, often those I meet every day. The first pieces that were created as my solo project -Eliza A. Tkacz - dealt with rather difficult social topics, although I tried to dress them up in ambiguous, sometimes light and fleeting sounds.

Some people compare you to Björk, Tori Amos and Kate Bush due to your voice timbre and musical output. Are you satisfied with such comparisons. Are these artists important, inspiring for you?

Although I try not to be directly inspired by existing musical themes, I am very happy with comparisons to famous artists. I actually listened to Tori Amos a long time ago, on a cassette tape. With Björk, I've always been fascinated by her process of searching and creating music in her head. I identify with this process very much. For me, too, music is not created under my fingers or on my vocal cords, but first appears in my imagination. When I sit down at the instrument, I try to bring out what I have already composed in my mind.

In your work, you are inspired by Scandinavian music. You have three singles: Believing in Silence (Home), Swan and Until Death Do Us Part, which constitute a conceptual triptych. What do you sing about in them? What do you want to draw listeners' attention to?

My first released single is doubly titled "Believing in silence (Home)" (2018) and tells the story of how, despite differences, all people share one dream - of a peaceful, warm and safe home. The second single titled "Swan" (2018) talks about growing up and making a choice between the reality of the current situation and striving for a better life and a better world. The third single entitled 'Until Death Do Us Part' (2018) deals with domestic violence and unconditional love. All three singles form a triptych on current social issues.

The creative, release and promotional process is a very long process. When releasing my first single, I realised that in order to find the strength to go through this process, I needed to write and sing about things that are not only important to me personally, but also have a timeless dimension and deal with global phenomena and issues that I would like to bring to the attention of my audience.

Your debut EP Flash Frames is very diverse, combining electronic music with guitar and piano sounds. What did you want to convey to the audience while creating these four tracks?

The EP album titled. "Flash Frames" is a song about love in different forms. It was inspired by Jack Hugo Bader's reportage "A long film about love. Return to Broad Peak". It includes four compositions of my authorship, but as far as the sounds are concerned, they are the result of production cooperation of three musicians. Apart from me the co-producers of this album are: Łukasz Rogini Robakiewicz and Artur Leszy Lesiak. The guys managed to combine the delicate timbre of my voice with our common love for strong guitar sounds. Hence, diversity naturally arose.

On this album the listener will not find romantic and fulfilled love. There is youthful love, but it ends tragically. There is friendship, but an ambiguous one. There is also the theme of being here and now and noticing those people who are around us. At the end we are transported to a future where we can say the worst things about ourselves and still feel loved and accepted.

You represented Poland at the Live At Heart International Festival in Sweden in 2020. Due to a pandemic, the concerts were held online. Are you invited to this year's edition and are you raising funds for the trip?

The band and I were really looking forward to going to Sweden and playing our first shows on the international stage. A showcase festival is not only about concerts, but it's also an opportunity to establish cooperation with other artists from abroad, promoters, agencies. It's always a great chance to promote Polish art abroad.

A great opportunity, but also a big investment, because it is necessary to pay for transport of people and equipment, insurance of instruments, stay on the spot. There are many expenses, and as an independent performer (without a label), I cover them myself. Hence, the idea of a fundraising (https://zrzutka.pl/5gw3th).

Unfortunately, the pandemic has thwarted the festival plans, the dynamically changing situation does not allow for a real promotional action. At the beginning of this year I received a message that this year's festival will take place in Örebro, but will the situation really allow it? Nobody knows. For my part, I would like to encourage you to listen to our music on the Internet and to come to one of the concerts that will be held in Poland. I am releasing another album this year and if the situation allows, we will go on a promotional tour in the country.

You are also interested in images and animation. Do you direct and produce music videos, is it only about your own works?

Animation is my hobby, but for now I don't share it with anyone. I started with 2D animation, and now I try my hand at 3D as well. I happened to direct and produce music videos for my own songs. I also made one music video for another artist, but it hasn't had its premiere yet.

I'm interested in low-budget productions, because then you have to think a little bit. I admire those teams who, even without huge resources, are able to make art and still have fun doing it. I guess that's what separates a job from a hobby - freedom and fun.

What are you currently working on?

I am currently working on a couple of great things. Firstly, I am finishing work on my second mini album, "Ithaca", which will be released in the autumn. It will be a return to my childhood, dreams, ambitions and travels. Its direct inspiration is Homer's "Odyssey", but I don't hide that there will be hidden autobiographical threads in it, as in all my works. I am also inspired by film scenes and themes.

Secondly, we are active with the girls in Scene for Women. It is a nationwide initiative, bringing together over fifty female musicians. The closest result of our activities will be a cover of the song "Think", originally sung by Aretha Franklin. Our version will be surprising, I can already guarantee that.

In this project, I took care mainly of the music production, although my voice can also be heard among the vocal parts. This project is particularly important to me because it draws attention to the role of women in music and in society.

Thirdly, I am working on another mini album, which I hope will be released next year. I don't want to reveal the title yet, but I think I can already say that its main theme will be anger.

Why is it worth having a passion in life?

Having a passion is fun, exciting and a break from the worries of everyday life. It is good to have something that you do just for yourself and that you are not

held accountable for or judged too much. Besides, it is very important to have a balance between work life, family life, self-development and relaxation.

For those who would like to learn more about my passion or would like to share their interests with me, I invite you to my website, social media and streaming platforms, just type Eliza A. Tkacz. See you at the concerts!