Exactly 100 days before the opening ceremony of EUG Lodz 2022, the official launch of the clock counting down the time to the event, which will take place in our city in mid-July, took place. 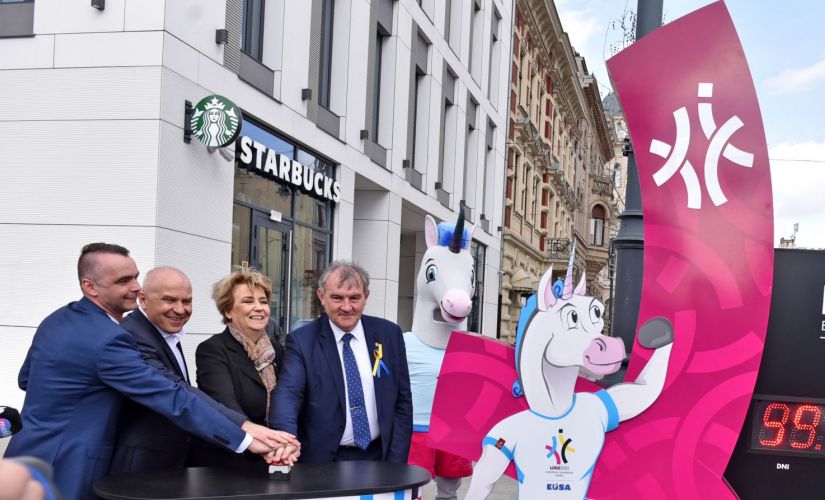 The clock was placed at the corner of 155 Piotrkowska Street and Mickiewicza Avenue. The symbolic launch was attended by Professor Krzysztof Jóźwik, Rector of Lodz University of Technology, Hanna Zdanowska, President of the City of Lodz, Adam Roczek, President of EUSA and Tomasz Aftański, member of the Executive Board of the Academic Sports Association.

The Rector of Lodz University of Technology, Professor Krzysztof Jóźwik, thanked all the people and organizations involved in organizing the European Universities Games. - This event is not only for the university, the city, but also for Poland, he said and invited everyone to participate.

Hanna Zdanowska, the President of Lodz, who was present at the meeting, thanked Lodz University of Technology for taking the trouble to organize the EUG, as the leading partner of the event. - Lodz University of Technology has convinced the city to organize the event and has united the universities in Lodz to cooperate. I hope that everyone will work together to show the best face of our city. This is very important, because the number of people who will visit us will be really impressive, said the President.

The Ambassadors of the event also took part in the ceremony: Krystyna Strasz and Martyna Grajber, volleyball players of ŁKS Commercecon Lodz, Adam Kszczot - indoor world champion and multiple European vice-champion in the 800m run, and a special guest: the president of the Watchmaking Promotion and Development Association - Piotr Łukasiński.

The EUG in Lodz will last from 17 to 30 July 2022. For two weeks, students from at least 40 European countries will compete for medals.