A team of students from the Lodz University of Technology - Lodz Solar Team - operating at the Institute of Turbomachinery, presented the latest version of the electric vehicle - Eagle Two (10.09) in Monopolis. In a few days, on 18 September, the car will take part in an international competition in Belgium. 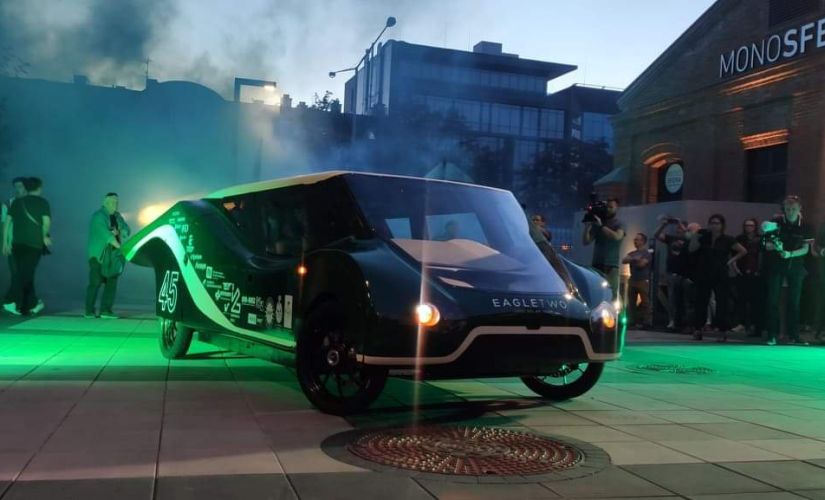 The changes made to Eagle Two were made with the iLumen European Solar Challenge 2021 24-hour race in Belgium, at the former Formula 1 Zolder Circuit, in mind. In a week's time, the team from TUL will attempt to defend the title of Champion, won at this venue in 2018. The goal of the students' struggle in the competition is to complete as many laps as possible within 24 hours, while consuming as little energy as possible.

The latest edition of Eagle Two is visually striking, with a complete change of body colour from grey to a chic combination of bottle green, enhanced by black and

white accessories. The students have also introduced a number of technical innovations including: stiffened steering. New seat mountings for faster mounting and dismounting, while increasing driving comfort. Ceramic coatings have been installed on the windscreen and fog lamps for greater safety.

The refurbished vehicle also features an On-Board Diagnostic (ODB) self-diagnostic system for quick fault diagnosis, which also has charging capability. Drivers looking for convenience will appreciate the student-designed and programmed on-board computer. It is a 10-inch touch screen that not only allows us to find the best possible route using GPS navigation, but also familiarises the user with the car's current parameters, such as range, amount of energy generated from photovoltaic panels or engine temperature.

One of the major innovations to be found in the new Eagle Two is the use of a material developed in cooperation with the Institute of Biopolymers and Chemical Fibres, based on bird feathers. As a result, the interior of the car has been significantly soundproofed, and is also thermally insulated by non-flammable down. The car is equipped with 5 square metres of photovoltaic panels, thanks to which it can move using only solar energy. The battery, when fully charged, is enough to travel 2,400 km. The car has two BLDC engines, dedicated to Eagle Two with a total power of 10 kW, which can accelerate the car up to 140 km/h.

The Lodz Solar Team has many international achievements and awards to its credit. Students from the Lodz University of Technology made their debut in 2015 at the Bridgestone World Solar Challenge competition in Australia.