Innovations in the treatment of osteoarthritis

This painful condition affects more than 20 per cent of the entire population, not just the human population. It usually ends with surgery or joint implantation. Researchers from Lodz University of Technology, together with medics, are developing an innovative method of treating it. Assoc. Prof. Marcin Kozanecki, from the Department of Molecular Physics at the Faculty of Chemistry, head of the OPUS project, explains the method. 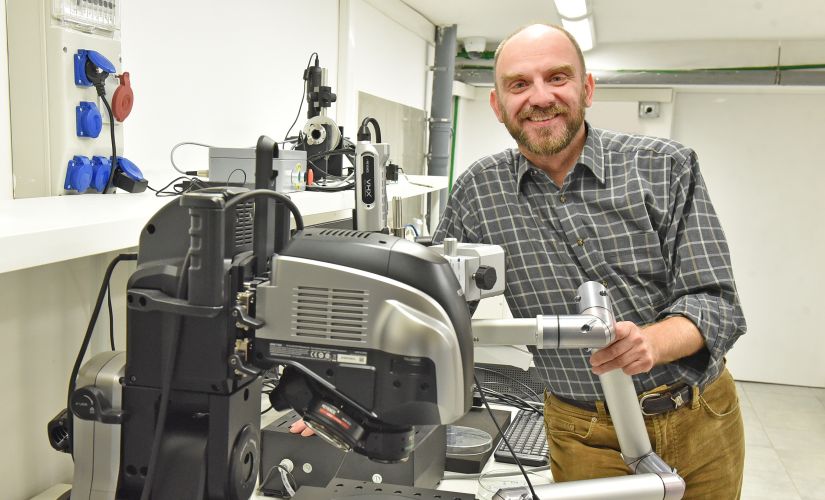 Osteoarthritis is one of the most common painful conditions that, sooner or later, everyone encounters in their lives. How can scientific nanochemists help tackle it?

True, we often think it is a disease that only affects people at risk of injury, e.g. athletes whose joints are subjected to very high strain - basketball players, volleyball players, tennis players, ski jumpers. However, this disease affects more than 20 per cent of the total population. Not only human. It is said that elephants get fat throughout their lives. At an advanced age, their knees are not capable of carrying so much weight, which is the cause of many deaths among this species. Does a similar, though perhaps not so tragic, scenario not also apply to us humans? As we age, the progressive physiological changes in our bodies and the cumulative effects of the mechanical stresses I mentioned above result in degeneration of the joints - especially the hips and knees. Of course, we can already mitigate the effects of osteoarthritis by replenishing the 'grease' in our knees. Injections of suitable substances, e.g. hyaluronic acid or collagen are the current standard for treating osteoarthritis. Unfortunately, these compounds only provide relief periodically and are naturally removed from the joint space. It usually ends with surgery and joint implantation. We have a different idea.

What is the innovative treatment method being developed by your scientific team?

At the outset, I would like to emphasise that the project is being carried out by several research groups including that of Professor Joanna Pietrasik at the Institute of Polymer and Dye Technology, where the synthetic work is being carried out. We cooperate very closely with the MSWiA Hospital in Warsaw, with the eminent surgeon Professor Ireneusz Kotela, who provides us with materials for research, but above all supports us in medical aspects, and with the group of Professor Marian Szczerk from the Radom-based Institute of Exploitation Technology, part of the Łukasiewicz Research Network, a recognised specialist in friction research. We want to approach the problem comprehensively. Not only treat, but above all prevent. The project has two main objectives - the development of procedures that allow non-invasive diagnosis of the knee joint and the early administration of an osteoarthritis formulation containing 'bottle-brush' copolymers that would permanently bind to the surface of the cartilage tissue of the joint, reduce friction and thereby limit cartilage degradation.


What are bottle-brush copolymers?

In the simplest terms, these are macromolecules that resemble a bottle cleaning brush, such as those used by mothers of newborns. In fact, they are very complex molecules made up of millions of atoms, some of which form a simple chain to which side chains are attached. To me, the whole thing reminds me of a butterfly caterpillar or a crocodile. A special feature of such copolymers is the large number of parameters that allow the final properties of the product to be designed, already at the synthesis stage. These are the length of the main chain, the number and length of the side chains and, above all, the chemical structure of the individual elements, with the groups at the ends of the side chains being particularly important. It is also possible to produce such macromolecules, which will have different properties in different fragments.

How can new materials help osteoarthritis?

The copolymers we have developed have two main types of segments. One of these segments, containing phosphorylcholine groups, will provide sufficiently low friction, while the other segment will allow the macromolecule to anchor to the surface of the cartilage tissue. We produced copolymers with different anchor segments to test which one would be most effective. This stage of research is still to come. The polymers will be introduced into the joint by injection and will fuse to the tissue surface through a chemical reaction. These chemical bonds are intended to ensure the long-term presence of the copolymer in the joint. We can say that we will cover the cartilage with a thin, slippery, film that will reduce friction inside the joint and protect the cartilage from degradation.

What is the role in the project of Professor Krzysztof Matyjaszewski, an eminent chemist from the USA who is also associated with the Department of Molecular Physics, where the research is carried out?

Professor Matyjaszewski is the originator of the whole project and was initially the project manager. Due to procedural reasons, he was unable to direct the project until its completion, but he is still actively involved in the ongoing work. His vast experience, knowledge, creativity are invaluable. It is safe to say that he is our leader and unrivalled role model. Probably the best term would be to say it is the spiritus movens of the project. The opportunity to work with a scientific authority of Prof Matyjaszewski's calibre is an excellent lesson for both young science students and older ones. For us, this is a huge honour.

The project is funded by the National Science Centre from the OPUS programme. When can we expect concrete results from the research?

This is the most difficult question. The COVID pandemic situation has strongly slowed down our work. The MSWiZ hospital was a COVID hospital for a long time, and we faced a lot of constraints at TUL as well. Now we are catching up. We are currently finalising the development of a diagnostic methodology based on spectroscopic studies. We are in the process of purchasing a suitable spectrometer with a probe that we will be able to insert into the knee joint. We should start in vivo studies early next year. We have refined methods to synthesise several bottle-brush copolymers. Testing of their frictional properties is underway, which is a major challenge as we need to analyse monomolecular layers, i.e. of single molecule thickness. We hope that next year will allow us to overcome the difficulties in this area and move on to the animal testing phase - but this will probably be in another project.