Lodz University of Technology on the podium. Summary of the EUG 2022

During the two weeks of the European Universities Games, athletes from 37 European countries represented more than 400 universities. In the overall classification, Lodz University of Technology came third, while universities from Poland secured the top spot on the podium. 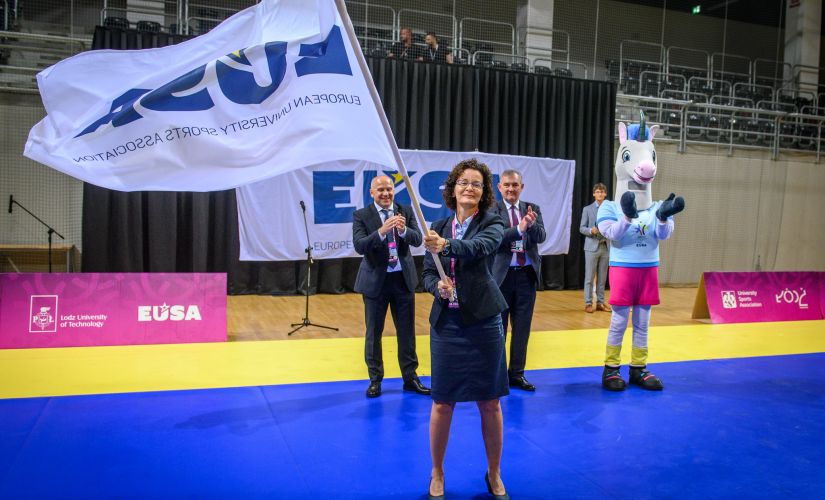 Although preparations for the EUG 2022 in Lodz took years, after two weeks of competition they have already made history. The event was attended by 5,000 athletes from all over Europe. Although Polish students won the medal classification, among the individual universities that took part in the Games, the Turkish Yeditepe University turned out to be the best. Not all athletes managed to win medals, but each of them returns home richer with memories and experiences.

The first tournaments were held in futsal, tennis, table tennis, volleyball, beach volleyball, beach handball, 3x3 basketball, water polo or kickboxing, among others. The competition included 20 disciplines at 15 venues in Lodz and the region. The stands in the Geyer Gardens were truly besieged - surrounded by post-industrial buildings, arenas for beach sports and 3x3 basketball were created. The evening basketball dunk show in the spotlight attracted great interest.

The swimmers changed their fortunes

In the final straight, we could not boast a single medal, but on the first day of the swimming competition in the Sports Bay at TUL, our luck changed - Marcel Wągrowski and Jan Kalusowski each won a gold medal. In the end, swimmers from TUL received five gold medals, one silver and one bronze. On the top step of the EUG Lodz 2022 podium stood: Marcel Wągrowski, Jan Kałusowski, Jan Komorowski and Zuzanna Dzwonnik.

A female karate fighter from TUL - Kinga Harast - also took part in the fight for gold, facing German Meryem Yildirim. Although she fought back most of the time, she scored the decisive point in the last 10 seconds and won the duel (5:4). Thanks to Kinga's medal, our university was promoted to third place in the general classification of the universities with the achievements of eight medals, including six gold.

The match is an excuse

At the halfway point of the European Universities Games, a colourful, musical parade of several thousand people marched along Piotrkowska Street in Lodz to the rhythm of samba. In the Sambodrome, on a section of 2.5 kilometres, students-athletes from all over Europe marched, and the inhabitants of Lodz joined them. In turn, a day later (24 July), the family Erasmus Run – a four-person relay over a distance of 10 km – also started along Piotrkowska Street.

During the EUG 2022, discussion panels were also held, referring to the educational and social aspects of academic sport in Europe. Outside the arenas of the Games, workshops for students and volunteers were conducted, which integrated young people in joint activities. The organized event was a team effort in the whole sense of the word.

- When we started preparing for the EUG 2022 nearly two years ago, the project was practically still in its infancy. At the beginning, we worked only in a team of a few people. Later, more people joined us, up to a more than forty-person line-up, which was divided into smaller teams. EUG 2022 involved thousands of hours of work with great people at all stages of the project. And it worked – says Dawid Ciżewski from the Organizing Committee of the EUG 2022 at Lodz University of Technology.

During Saturday's closing ceremony of the EUG 2022, the Rector of TUL handed over the flag of the European University Sports Association to the organizers of the Games, which in two years will be held in Miskolc and Debrecen in Hungary.

In addition to Lodz University of Technology, EUG 2022 was co-organized by: University Sports Association of Poland, the city of Lodz, Lodz Voivodeship Marshal's Office and six public universities in Lodz.