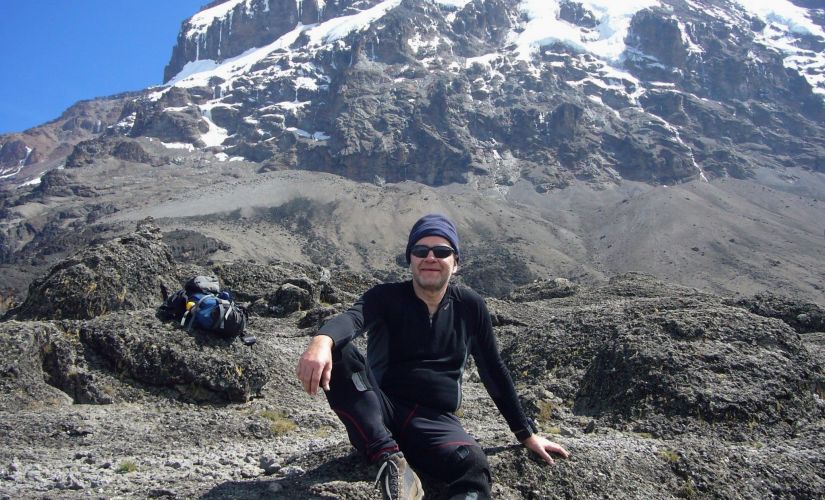 Mathematics is not the only passion of Prof. Jacek Banasiak. He likes, from time to time, to escape to the mountains. He has climbed the main ridge of the Tatra Mountains and conquered the highest peaks of Africa, among others: Mount Stanley in the Ruwenzori Mountains and Mount Kilimanjaro.

There are many people among mathematicians who are fascinated by mountains. Is this a coincidence or some special need of mathematicians?

I don't know if this is a confirmed fact or folklore. If we assume that another folk wisdom is true, that mathematicians are introverts, the need for mountains may stem from a desire for solitude. However, in our generation there were also many physicists and chemists who climbed, among others the outstanding Polish Himalayan mountaineer - Piotr Pustelnik worked at the Institute of Chemical Engineering, TUL.

After studying mathematics at TUL, you became a mountaineering instructor in Polish Mountaineering Association. How long did this adventure last?

I was a mountaineering instructor in the eighties, actively working from 1986 to 1992. In the economic reality of declining Polish People's Republic, it was a good way to combine business with pleasure, and also a possibility to survive until the first payday.

Together with a colleague from the Institute of Mathematics you climbed the main ridge of the Tatra Mountains, many Tatra walls, also in winter. How do you recall this period from the perspective of several decades?

Beautiful years. I climbed with partners who have already appeared in interviews: Jacek Jachymski and Mariusz Wójcik. We climbed The Tatra Ridge with Jacek, which I count among my best achievements. It's a pity that we didn't finish the Slovakian part of the West Tatra ridge...

We were cut off from the world for a fortnight. At the start of the trip, due to a weather collapse, Jack and I spent unplanned few days in the Wilderness Valley (Dolinka Dzika), consuming much of our supplies. On the last day before descending the ridge, we consumed only boiled water. It turned out later that the decision to return saved us a lot of trouble. The manager of the climbing camp we were at was to notify the police of our disappearance the following day. Let me remind you that we did not have mobile phones at that time.

This is probably an exaggerated statement. Once somebody has a great fascination with mountains, they become their whole life. It is rather my hobby. I escape to the mountains every now and then. Kilimanjaro is very commercialised. We see long queues of climbers to reach Mont Everest, and the queue to reach Kilimanjaro is much longer. However, as the case of Aleksander Doby has shown, this altitude can be very dangerous. A trip to Kilimanjaro requires good preparation.

You have been in the Republic of South Africa for many years, you are currently a researcher at the University of Pretoria and Lodz University of Technology. What motivated you to go?

I have been in the RSA since 1992. In 2016 I received a large grant and thanks to that I have a full-time research-only position, which allows me to divide my time between Poland and the RSA. I left because the situation in Poland was quite difficult and I wanted to look around the world.

I applied for a few postdoctoral internships and Janusz Mika, who was staying in Durban at that time and later became a professor at TUL, was the first one to send me a positive answer. Later my wife, who is a biologist, convinced me to stay for longer. I wasn't particularly reluctant because the salary was better, the level of bureaucracy was lower, the medical care was impeccable, and summer lasts 12 months a year, I never liked winter. There are also disadvantages, of course, such as a high crime rate, which imposes a different way of life than in Europe.

The South Africa is four times bigger than Poland. It's the wonder of unearthly nature. What are your favourite places in the RSA, the mountains or maybe the national parks?

Although some of the oldest human remains have been found in the RSA, and the Sterkfontein area near Johannesburg can be considered one of the main cradles of humankind, and the remains of the medieval kingdom of Mapungubwe, which later became the Kingdom of Zimbabwe with the impressive ruins at Masvingo lie within the RSA 's borders, it's not the monuments or the artwork of the RSA that you come to see, it is its nature.

It is a country which covers several climate zones. Within a dozen or so days you can visit national parks with subtropical vegetation such as Kruger Park, savannahs in Hluhluwe/iMfolozi Park, the floodplains in iSimgaliso, whale watching around Cape Town, the Kalahari Desert, or finally spend time above 3000 metres asl hiking in the Drakensberg.

It's hard to name favourite places. We try to travel regularly to different parks, but if I want to hike, I go to the Drakensberg.

You have conquered many peaks in Africa. Which mountain expedition is most memorable for you?

Each trip had its own character. Physically, climbing Mount Stanley in the Ruwenzori Mountains was probably the most difficult. Most big African mountains are volcanic cones that you just climb up and down in a straight line. To reach Mount Stanley one passes through marshy, muddy terrain, while it rains often even in the dry season, repeatedly crossing ridges reaching above 4,500 m, with sums of daily ascent between 1,500 and 2,000 m. The descent is similar – and while Kilimanjaro can be descended in one day, Mount Stanley takes two and a half days of walking, 10 hours each day.

Mentally, climbing the active volcano Ol Doinyo Lengai in Tanzania was probably the hardest part. It is an almost regular cone with a considerable steepness. Although technical difficulties are minor, you use your hands for most of the climb and the base of the mountain is visible under your feet in a straight line throughout the entire 1,500 m ascent and descent.

Why is it worth having passions in life?

Well, that is the question. Work can also be a passion, but here I think it is more about having a safety valve.

Wandering in the mountains, I seek solitude and physical exertion among landscapes unspoilt by man. From an early age I enjoyed travelling alone, exploring, and discovering wildlife.

In my professional passion - mathematics, I am drawn to solving relatively clear intellectual problems on my own terms. I work quite slowly at my own pace. I do not like racing and competition. It's the same with the mountains, I don't run from start to finish to win, but I go and stop when I feel like it.