The number of oncological patients is growing every year, and as a result, the need to develop effective anti-cancer drugs is increasing. A team of scientists from Lodz University of Technology, Medical Universities of Lodz and Lublin and the Centre of Molecular and Macromolecular Studies of Polish Academy of Sciences in Lodz are responding to this challenge. They designed, synthesized, and thoroughly studied the physicochemical and biological properties of two new compounds with potential anti-cancer effects. dr hab. inż. Agnieszka Czylkowska, TUL prof. and prof. dr hab. n. farm. Paweł Szymański. 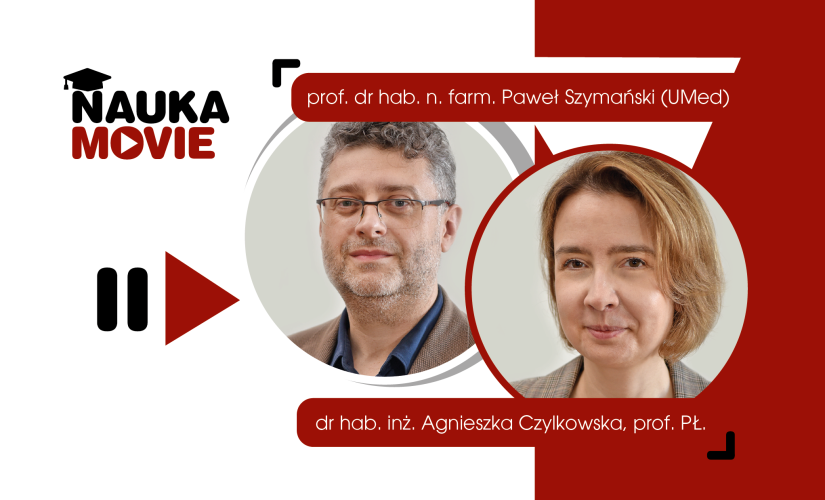 What is the path from drug development idea to implementation?

Agnieszka Czylkowska: The days of accidental drug discoveries are over. In the modern world, the design of modern medical substances is deliberate and mainly based on the relationship: disease entity - drug. Modern computer software used for this purpose allows you to design the structures of new drugs that will interact in the human body with places or systems that have been affected by the disease.

However, in order for this to happen, our compounds must have appropriate physicochemical and biological properties. Designing a compound that will be a potential drug candidate is not at all simple. It is even more difficult to obtain it, and then to comprehensively characterize it. It should be emphasized here that theory does not always go hand in hand with practice. What may seem simple on the surface, can keep many scientists awake at night.

You have studied the physicochemical and biological properties of two new compounds with potential anti-cancer effects. What are these compounds?

challenge of designing and synthesizing new anti-cancer compounds. This team has been working on the molecular aspects of cancer for a long time. On the basis of the simulations and computer calculations, chemical structures of compounds meeting the assumptions adopted by scientists were designed. The synthesis of these connections was carried out at Medical University of Lublin.

A.Cz. The obtained compounds were sent to Lodz University of Technology, where scientists from the Faculty of Chemistry examined their physicochemical properties. Then a team from Medical University of Lodz performed biological tests. On the basis of previously conducted in silico studies appropriate cell lines were selected to conduct in vitro studies. The obtained results gave the whole team of scientists hope, confirming the validity of the undertaken research. The results definitely outlined the direction in which the research group should go. Data published in the paper: Czylkowska, A.; Szczesio, M.; Raducka, A.; Rogalewicz, B.; You're spinning, P.; Czarnecka, K.; Szymański, P.; Pitucha, M.; Pawlak, T. Cytotoxic Activity against A549 Human Lung Cancer Cells and ADMET Analysis of New Pyrazole Derivatives. Int. J. Mol. Sci. 2021, 22, 6692. doi: 10.3390/ijms22136692 are just the tip of the iceberg and will continue in the future. This publication also shows the excellent cooperation of four leading research centres and the friendship that was born during this cooperation. It should be remembered that the interdisciplinarity of the teams gives us the opportunity for multidirectional research, which nowadays, with the ever-growing number of people suffering from oncology, gives hope for better, more active drugs and a more effective fight against cancer.

The research concerns the potential use in the treatment of lung cancer. What characterizes this particular type of disease?

P.Sz. Lung cancer affects 2.1 million people annually (1st place - 11.6% of all cancer cases in the world) and causes the death of about 1.76 million people (1st place - 18.4% of all cancer deaths). In men, cancer is the leading cause of death (22% of all deaths) and in women the second cause of death (13.8% of all deaths) from cancer. This cancer is divided into several types, among which the most common is the so-called adenocarcinoma; it accounts for about 40% of all cases. It is formed from small cells of the epithelium of the respiratory tract, which secrete mucus. It occurs most commonly in smokers (both men and women) regardless of age. Understanding the molecular basis of each disease, including lung cancer, became the basis for designing such structures, which in their structure contained groupings (pharmacophore groups) with affinity for cancer cells. On the other hand, a number of in silico studies allowed to optimize the designed chemical systems.

Every new piece of information about research into anti-cancer drugs rekindles hopes in patients, and what are your feelings, often working for years on new solutions?

A.Cz. In fact, every little discovery and study is an experience for us, especially when the results of biological research confirm previously developed assumptions. These are the moments when we feel that our dedication, work and sleepless nights make sense, because in life the most important thing is to feel the meaning of what we do. From the point of view of a scientist, the work of a chemist and a pharmacist are very similar.

P.Sz. Here, it is important to emphasise that we are only comparing the two professions from the side of university academics. The differences relate to the research performed. Chemists characterize compounds from the physicochemical side, while pharmacists study them from a biological point of view. Regardless of whether we are chemists or pharmacists, we combine the skills of a lecturer, inventor and visionary. It is at our universities that we fulfil the dreams of discovering something comparable to the discovery of America by Christopher Columbus.

What is your TUL team's contribution to the project awarded by the 2 universities?

A.Cz. Researchers from the Faculty of Chemistry at Lodz University of Technology obtained single crystals of the tested substances that were suitable for measuring their crystalline structures. Thanks to this research, the spatial structures of the obtained crystals were known, which allowed to analyze the possibility of their interactions in the human body.

The next stage was a thorough knowledge of physicochemical properties, because they determine the further fate of this type of compounds. Particular attention should be paid here to the water solubility of combinations and their stability at room temperature Solubility in water determines compounds for biological research. Its absence means that even the most promising combinations have little opportunity to test their biological activity and thus their potential use as drugs. Once all the established criteria were met, the combinations were transferred to the Medical University of Lodz, where biological tests were undertaken under expert supervision.

The award is an excellent proof of the effectiveness of interdisciplinary and intercollegiate cooperation. What are your plans for the future?

P. Sz. The award is only the result of one of several joint projects in the field of cancer. In addition, the teams are conducting research on neurodegenerative diseases together. In summary, the main research objectives revolve around the broadly defined diseases associated with the progress of civilization. The collaboration is growing every month and involves not only research (resulting in scientific publications), but also the submission of projects, in various competitions providing research funding.

A.Cz. Every human being lives for the fulfilment of dreams and ideas. Each of us once wanted to save human lives. Each of us has also experienced the illness or death of a loved one. Being a scientist offers the opportunity to combine scientific passion with the excitement of a normal person. Scientific work is nothing more than a mission, thanks to which we discover individual elements of the mystery of life. Each of our discoveries brings us closer to learning about the intricacies of nature, including ways to heal and solve the problems of our existence.