Many people had been waiting for this meeting since the media reported at the end of November (23.11) that Dr Sławosz Uznański, a graduate of Lodz University of Technology , had become a reserve astronaut of the European Space Agency (ESA). The auditorium where the meeting was scheduled at TUL was filled to its full capacity. 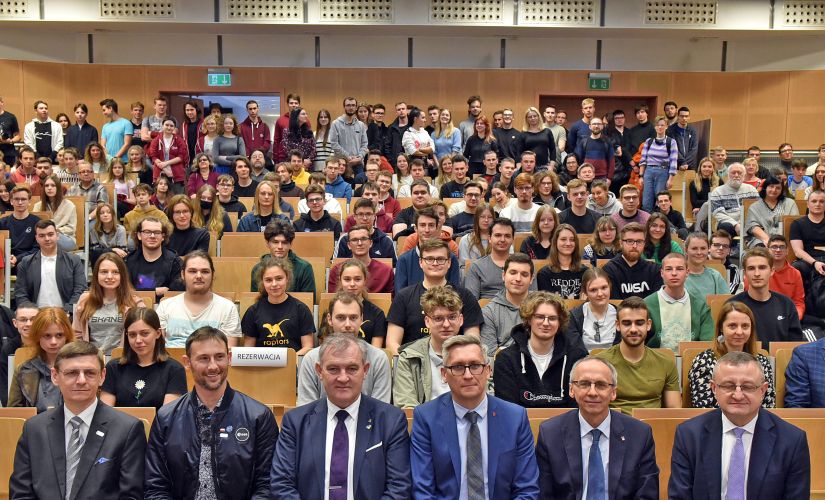 Dr Sławosz Uznański came to Lodz University of Technology (12.01) at the invitation of the Rector of TUL, accompanied by the President of the Polish Space Agency - Professor Grzegorz Wrochna. He then met with students and staff of our university at the Faculty of Electrical, Electronic, Computer and Control Engineering , where he studied electronics and telecommunications, obtaining his M.Sc. in 2008.

- I am glad to be here, I had lectures in this hall for three years, then I studied abroad in France. Lodz University of Technology has always had a very large exchange of foreign studies," said Dr Uznański at the beginning of his presentation.


During the meeting, he talked about his recent career, which began and then continued at French universities. He received his PhD in microelectronics from Université d'Aix-Marseille in 2011. Since the beginning of his career and scientific work, he has been involved in space technologies.

Then he outlined the long and very difficult six-stage recruitment process he went through in applying for the astronaut position, which ended with great success. He was among the 17 people selected by ESA for the astronaut corps. During the meeting, he gave many valuable tips, especially useful for students in their career development, and answered a multitude of asked questions.


Dr Uznański is currently working at the European Organization for Nuclear Research (CERN). He is responsible for developing the radiation-resistant control system for the power converter, which has been a core part of the Large Hadron Collider (LHC) since 2017.

Dr Uznański is in the 11-member reserve group, but he hopes that his skills gained at CERN (European Organization for Nuclear Research), in the construction of space accelerators, will soon be used in one of the space programmes. And this already depends on taking diplomatic steps and building a strategy between Poland and the European Space Agency.

As Professor Grzegorz Wrochna said at the beginning of his speech, we hope that the term ‘reserve’ can soon be removed and that Dr Uznański will be a real astronaut and will fly into space.

Dr Sławosz Uznański is one of 594 Poles who applied for the position of astronaut. In the final stage of the competition, 22 people remained from our country; in the end, only he from Poland was selected by ESA and has a great chance to fly into space, as the second man in our history.

A photo-report of the event can be found on the TUL Facebook page.